Posted by libhom at 7:18 AM No comments:

Email ThisBlogThis!Share to TwitterShare to FacebookShare to Pinterest
Labels: humor

State Senator Scott Brown, a militant, Christian fundamentalist and a major homophobe is running for the GOP nomination to replace Ted Kennedy in the US Senate. It turns out that this bigot is just as hypocritical as most other Christian right whackjobs.

Cosmopolitan has the nude pic from its old centerfold on their website.

Brown's genitalia are covered, which probably is for the best.

Posted by libhom at 9:45 PM No comments:

Hat Tip to The Immoral Minority:

Here's a post on my serious blog with some actions you can take to fight for real healthcare reform.
Posted by libhom at 7:00 AM No comments: 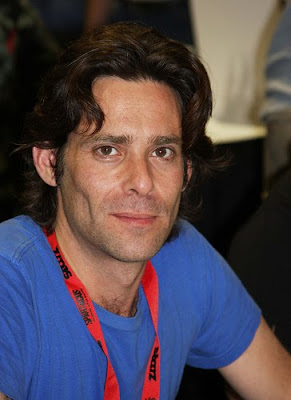 He looks thoughtful but a bit tired in this pic. I love his long, wavy hair. Even better, I love the chest hairs poking their way out of the top of his tee shirt. It always turns me on when that happens with hot guys.
Posted by libhom at 9:23 AM No comments:

"Joe Wilson Is Your Preexisting Condition"

I've parsed the domain name into plain English of a silly, childish website that isn't anywhere near as silly and childish as Wilson.

Hat Tip to From the Left:

Posted by libhom at 9:41 PM No comments:

Posted by libhom at 9:16 AM No comments:

Holy Shit! It's our presents! (If you live on the northern coast of Spain near France.)

Here's an explanation of the Caga tío.

On Christmas day or, depending on the particular household, on Christmas eve, you put the ‘tió’ partly into the fireplace and order it to “poo”. To make him “poo”, you beat him with sticks, while singing various songs of Tió de Nadal.

The tió does not drop larger objects (of course!! Can you imagine?), it does leave candies, nuts and torrons. When nothing is left to “poo”, it drops a salt herring, a head of garlic or onions. What comes out of the ‘tió’ is a communal rather than individual gift, shared by everyone present.

After hitting it softly with a stick during the song it is then hit harder as people say “¡caga tió!”. Then somebody puts his hand under the blanket and takes a gift. The gift is opened and then the song begins again.

Cagar is the verb "to shit" in Spanish and apparently in Catalan. If we beat effigies of politicians, will we get our country back as gift? Just asking.
Posted by libhom at 7:30 AM No comments: